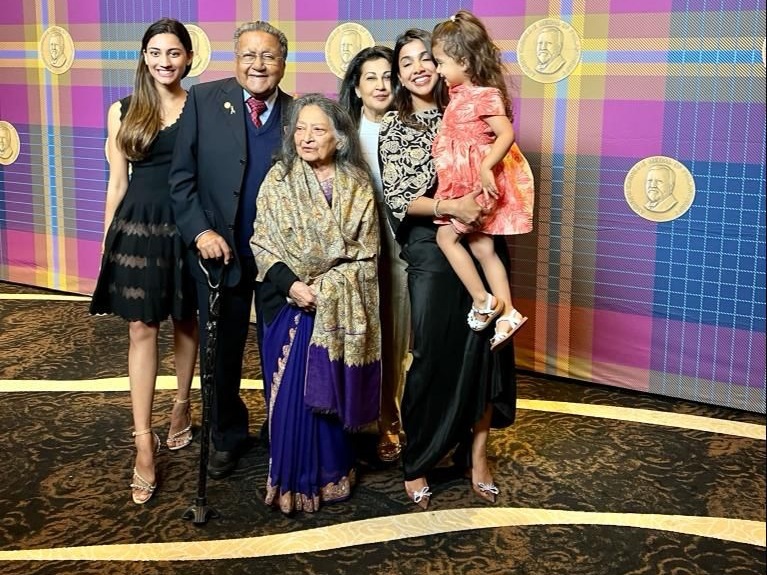 The day that Dr. Manu Chandaria received the call telling him that he had been nominated to receive the illustrious Carnegie Medal of Philanthropy must have been a very amazing day.  After an amazing journey of helping the society through the Chandaria Foundation and being very successful at it, the nomination was a culmination of his hard work!

At 93, he is one of five (5) people who were honoured with the 2022 Carnegie Medal of Philanthropy. His acceptance speech, on October 13, had well-calculated words, well timed pauses, truly the component of a master orator who has perfected his skill over seven decades.

The Carnegie Medal of Philanthropy is a private award for philanthropy, bestowed every second year to multiple people by the Carnegie family of institutions.

The announcement of this year’s nominees also said that, the honoured parties “have had a sizable and lasting impact on many of today’s most pressing issues through their support of medical lookup in most cancers and paediatric care, the development of ladies in STEM fields, the reduction of racial, gender, and monetary inequities”.

The household of Carnegie establishments is made up of more than 20 organizations in the United States and Europe centred by means of the philanthropist Andrew Carnegie. To date, more than sixty-five philanthropists have been honoured with the medal.

Medallists are nominated by the household of Carnegie institutions, and a selection committee representing seven of those institutions makes the final selection.

The founder of Chandaria Foundation was acknowledged for “advancing opportunity and addressing critical needs in Africa through investments in health-care infrastructure, secondary and greater education, poverty relief, and environmentalism”.

In New York City, at the award ceremony, he shared the podium with notable philanthropists Lyda Hill, Dolly Parton, Lynn Schusterman, Stacy Schusterman, and World Central Kitchen, all of who joined a remarkable listing of philanthropists who have received this biannual award. They were feted “for their tremendous contributions that make the world a higher place”.

It is most important to note that Dr Chandaria is the first African, and Kenyan, to acquire the Carnegie Medal of Philanthropy.  Definitely an honour that he has brought to our country and continent.

Other notable names to receive the prestigious award include The Gates Family, The Rockefeller Family, George Soros, His Highness the Aga Khan, The Cadbury Family, The Hewlett Family, and The Packard Family, Michael R. Bloomberg, and Paul G Allen.

In his speech, Dr. Chandaria said “When we develop and get to take responsibility for our societies, we become givers alternatively of takers. And that is the philosophy we should make very sure our teenagers and their children- to the fourth generation- follow.”

“In life, there is so much to do and yet, when we really think about it, are we doing it? We live once and that one time, we need to be useful to society because we can,” he told the audience at Carnegie Hall.

Dr Chandaria founded the Chandaria Foundation in 1955 with the help of his brothers and with the support of his parents. It had been a long time coming, since his return from studying in America and a dream he did not let go of despite many counter opinions from friends and family.

“Businesswise, I have retired from everything.”

Anyone who has spent time with Dr. Chandaria has more than not, likely heard him say this.

“Unless you detach completely, even with that which you have been running for these many years, you will continually be thinking about it and will now not be in retirement,”

Manu, is a practising Jain and in Jainism, the three guiding principles are

Jainism also encourages dwelling in a way that minimises the use of the world’s resources.

“In Jainism, when you cut off, you cut off. There is no connection left,” he says.

This principle was important to him when he decided to wholly focus on philanthropy, the foundation and making a positive difference in society.

Dr Chandaria challenges people and institutions to create foundations and have a positive impact on society.

He has been chancellor of a couple of universities like The United States International University (USIU) Africa, and of the Technical University of Kenya (TUK).  He also chairs various boards including The Bank of India, and at all these institutions, setting up foundations has been high on his list of priorities.  This, he feels, is more important than an “obsession with the company’s earnings margins.”

Impact Philanthropy Africa congratulates Dr. Manu Chandaria on this esteemed honour and will continue to work with him and Chandaria Foundation in bettering our society!