Change Maker Series: Making An Impact – One On One With Dr. Manu Chandaria 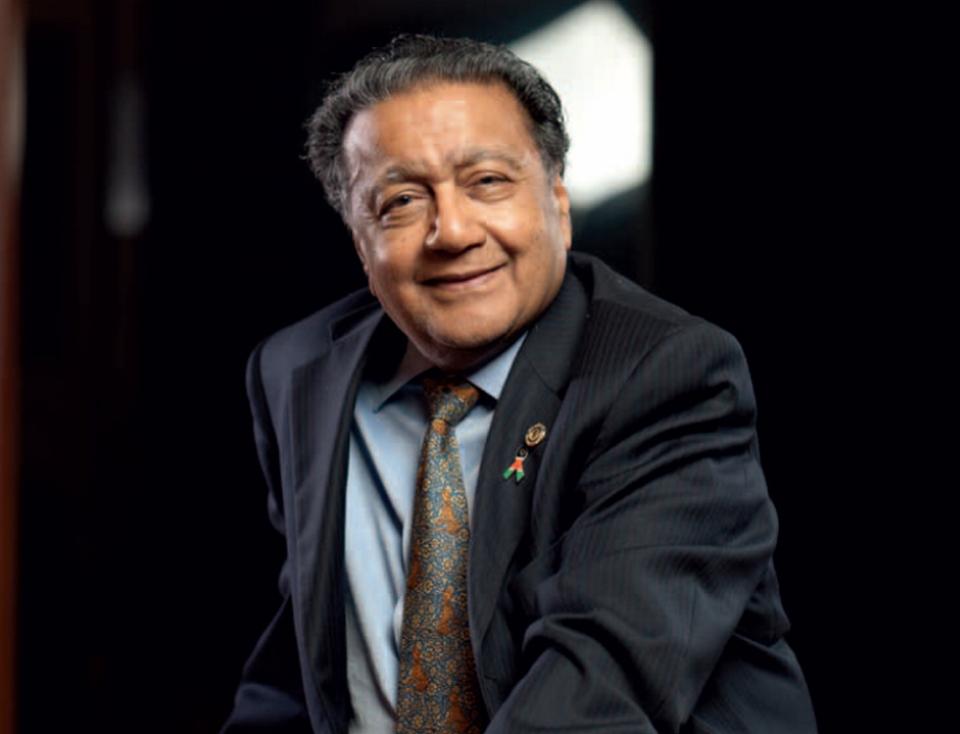 I had the privilege of interviewing Dr. Manu Chandaria, eminent businessman and Chairman of Chandaria Foundation. As one of Kenya’s Founding Fathers of Philanthropy, he has several decades of experience giving to society.

Giving is so ingrained in his identity, that the billionaire Industrialist introduces himself as ‘I am just a social worker.’

Here are my key takeaways from interviewing the man who laid the roadmap to show what businesses can achieve.

‘My father came to Kenya in 1916, with the goal to earn 4000 rupees then move back to India.’ After working in employment for 6 months working from dawn to midnight, his wages totaled only 120 rupees. His dream began to evaporate.’ This spurred him to start his own business in Ngara. Thanks to his tireless work ethic, his business made even more than that 4000 rupees. Chandaria’s father never went back to India – In fact, he called his entire family of siblings, cousins, and every relation who could come to move to Kenya. They came from a farming background in an extremely arid part of India – Kenya was much more fertile. But farming was not open to Asians in colonial Kenya, so they went into business. From this background, Manu learned two things: To really succeed and have an impact you must work together. He has held onto that ethos and to date, has always been the man to ‘bring people together.’

Indeed, when you start to introduce philanthropy, sometimes you may meet with suspicion. To counter that, how do you foster a spirit of collaboration? This was the question Manu encountered as a young man in his 20s. He foresaw that giving must be built-in to the company’s plan from day 1. Back then he proposed to his family, ‘Even before we create wealth, we need to give back to the community. Let us start a foundation. We start with what we have.’ Something he had seen being done in the US with the likes of Rockefeller and Ford Foundation. But the family resisted. They were a small company. They didn’t have the wealth to set up a Foundation. After much convincing, the Chandaria family agreed and committed early on that a proportion of the profits would always be allocated for social impact. Why this interest in giving to Society?

Dr. Chandaria credits two influences that led him to embrace philanthropy; One was the example of his parents and the other his personal and religious philosophy as a Jain. He recalls how they grew up watching their parents work day and night to care for the family’s needs. It was not easy especially because that generation of Kenyan Asians had not had access to much education. ‘My father could not read, write or speak English – he was heavily dependent on others to assist whenever he had to do banking, mail, and the like…he resolved to educate his children to the highest level he could afford so that they could have a better future.’ In 1940, the war gave Manu and his brothers an opportunity to study in India and the US, where they became the first few in their community to attend college. During their time there, they were deeply moved by the example of Mahatma Gandhi.

`We were impressed by this man who had given all his life. And the principle that came up with was sacrifice. Whenever you sacrifice, it brings true happiness.’ These examples led Manu, his brother, and his cousins to sacrifice their own potential careers in high-level employment in the US to return back to Kenya and work on growing the family business. When they graduated, the business had 40 employees, and within a couple of years, this grew to 100 then 450 in the early years. By this point, they had already become involved in giving. Early on, they made the decision that since the needs of the society usually far outweigh any philanthropist’s ability, they would focus on two major areas:

The first was Higher education, which began with just one Scholarship. Today it has grown to hundreds of scholarships which the KCDF administers on their behalf. The Chandaria Foundation selects the recipients, giving preference to more girls than boys. Their second was disability. Manu reflects, ‘My brother was deaf, so we chose to focus on giving access to people with disabilities.’ Over time, the Chandaria foundation’s impact grew to include building schools, medical clinics, planting forests, and much much more. The Chandaria Foundation has active chapters in Kenya, Uganda, Mumbai, and the U.K. Recently, in 2022, they gave 10 million Kenya shillings to rehabilitate inmates of Langata Women’s Prison. Their motive?

‘All of us have a duty to society – when you are doing business you are responsible from day 1 to help build the Society. This is regardless of whether you have a lot or a little. It goes beyond just writing a cheque. It is beyond you and me as individuals – we are part of something much greater.’ He believes that philanthropy is not just a responsibility for every leader and corporate, it is in fact a cornerstone of doing good business. ‘You don’t need a lot of money to give back – you can start by simply getting a few people together and planting trees.’ His advice to leaders is to start at whatever stage of business you’re in. If you’re small, start your CSI program small and grow. Philanthropy is not something to be undertaken ‘once we’ve accumulated wealth.’ If that’s the thinking, you’ll never get started.

As regards the common objection from businesses that building the society is the governments’ job, he responds, ‘ We all know that governments have great difficulty bringing about improvements. Why do you think there are so many foundations and trusts in the United States?’ Instead of blaming our governments for societal ills, each of us has the ability to do something. Long before Independence, Dr. Chandaria undertook to create organizations that would smoothen the relationship between businesses and corporates with the government. ‘We always asked – how can we work together with the government rather than against them?’ He helped form and served as Chairman to a number of organizations. These included the Kenya Association of Manufacturers (KAM), Founding Chairman, Kenya Private Sector Alliance (KEPSA), Founding Chairman, East African Business Council, and built a Pan African understanding of business alliances that stretched all the way from Ethiopia to Malawi. His chairman/advisor went on to become the Finance Minister in Nyerere’s government and was eventually taken by the World Bank to head the World Bank in Pakistan. Today, he is an active member of Impact Philanthropy Africa Forum and gave his time to speak to other corporate leaders and philanthropists to get involved in this new initiative.

As a parting shot, I can ask him what he’d like the philanthropic community to take away with? It is collaboration and cooperation. Collaboration and cooperation are core to Dr. Chandaria’s values. His foundation has planted tens of thousands of trees, for instance, but they do this together with the local community. He gets excited when he speaks of the potential domino effect. ‘Like a tree nursery we established in Starehe – imagine 650 schoolgirls and each one plants 10 trees…’

Dr. Chandaria explained that in giving, he has never been about building a name for himself. His vision is that every business leader, large and small, will embrace an ethos of giving. By embedding this culture of philanthropy in our organizations, we will have the power to steer Africa towards reaching our key development goals. And on that, Impact Philanthropy Africa is fully aligned!

Making an Impact: One on One with Dr. Manu Chandaria