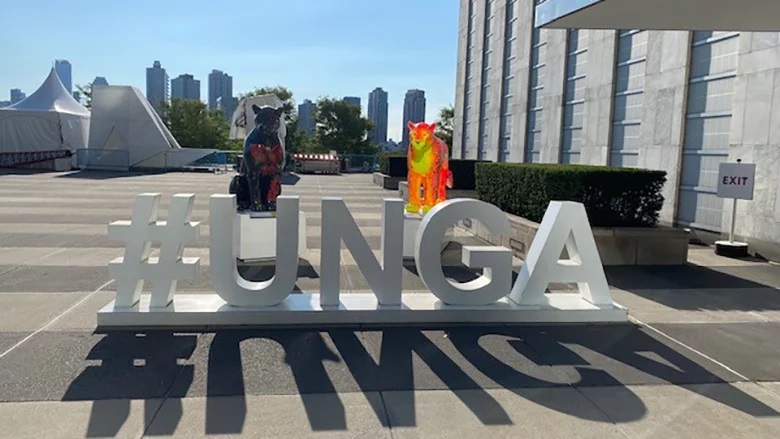 The 77th session of the UN General Assembly was held in New York with a range of interesting conversations. This year’s session opened on September 13 under the theme, “A Watershed Moment: Transformative Solutions to Interlocking Challenges”. Global leaders gathered to discuss and find solutions for the biggest challenges facing humanity right now. With the effects of Covid-19 reverberating through the world, the current war in Ukraine and its global effects remained the key topic of conversation.

Acknowledging that the world faces uncertainty and widening geopolitical fissures, Csaba Kőrösi, during his inaugural speech, reminded delegates that the United Nations was created out of the ashes of war and destruction, with the intention of being “a well of solutions”. He reiterated the need to involve the youth and engage them to provide innovative solutions to the problems facing the world right now.

As the risk of further hunger increases, Putin’s conflict has decimated agricultural productivity and decreased the GDP of many African nations trying to make it out of the pandemic and remove their people from the grips of poverty. The International Monetary Fund’s latest inflation data shows that inflation reached nearly 6% in the Caribbean, while it exceeded 9% in South America and more than 12% in sub-Saharan Africa.

Since February, most, if not all, of the grain and fertilizer imports from Russia and Ukraine to the port cities of East Africa have been halted. By disrupting the modest economic and tourism growth taking place throughout the continent, the conflict and its unpredictable nature have put Africa in real danger, said Macky Sall, president of Senegal.

From leaders’ speeches to side events, there was a unilateral cry to rethink multilateralism by modernizing the international system to be more inclusive and responsive.

“It is time for multilateralism to reflect the voice of the farmers, represent the hopes of villagers, champion the aspirations of pastoralists, defend the rights of fisherfolk, express the dreams of traders, respect the wishes of workers and, indeed, protect the welfare of all peoples of the Global South,” Kenya President William Samoei Ruto said during his speech before the General Assembly.

During an event on American leadership in advancing the SDGs, the UN Foundation and Brookings Institution invited elected officials, community organizers, and corporate leaders to share their stories of local action toward global change.

Currently there is no country is on track to achieve the 17 Goals by the year 2030. As a planet we are losing hard-won gains in health, food security, equality, and education because of COVID-19, conflict, and climate change.

Mr. Guterres proclaimed that “SDGs are issuing an SOS.” He called on the G20 to launch an initiative to scale up financing for developing economies that are burdened by the global debt crisis and whose financing available to meet the Global Goals is limited.

This year’s conference took place against a backdrop of climate catastrophes, from Pakistan’s devastating floods to drought and near-famine conditions in the Horn of Africa to the destruction caused by Hurricane Fiona in the Caribbean.

World leaders referenced the climate crisis frequently, and forcefully, throughout UNGA this year. The Secretary-General set the tone for the week, calling it the “defining issue of our time” in his opening address, and stating that it must be the top priority for every government and multilateral organization.

Prime Minister of Barbados Mia Mottley declared: “Any attempt to deny that the climate crisis has man-made origins is an attempt to delude ourselves and to admit that we want to be accomplices in the continuing death and loss.”

The Secretary-General convened heads of state for a climate roundtable to push for bigger and bolder climate action ahead of COP27, which took place in Egypt in November.

Denmark remarkably announced that it will pay other countries for “loss and damage” related to climate change which was historic as Denmark was the first UN Member State to take such a step.

Outside New York, the Global Clean Energy Action Forum in Pittsburgh put a spotlight on the opportunity to accelerate the clean energy transition, which could help the planet meet our climate goals while also expanding economic opportunities and bolstering energy security.

The UN Secretary-General’s Envoy on Youth, Jayathma Wickramanayake, reinforced Pakistan Prime Minister Shehbaz Sharif point on the effects of climate change in Pakistan, during the UNGA preview hosted by Financial Times in partnership with the UN Foundation. “We cannot solve new problems with old solutions, or with the same people in the room,” she told the audience.

President Joe Biden convened world leaders to host a Global Food Security Summit and push for a bigger collective response to the global food crisis to avert extreme hunger and even famine for hundreds of millions of people around the world. The U.S. announced over $2.9 billion in aid to address global food insecurity.

The Global Fund Replenishment Conference also hosted by U.S. President Joe Biden was held to fund the next phase of the Global Fund’s work to end three of the world’s deadliest infectious diseases: AIDS, tuberculosis, and malaria.

Heads of state from around the world attended to announce their country’s pledge toward the $18 billion target. The Conference ultimately raised $14.25 billion — a record for a multilateral health organization, but still short of the $18 billion needed to save 20 million lives in the year ahead.

It was abundantly clear during this year’s conference that the youth are not going to sit on the sidelines waiting for change to happen. They have taken up the mantle to create change. From revolutionizing education to radically reducing the planet’s use of fossil fuels, young people shook the table at UNGA, holding leaders accountable and speaking truth to power, including issuing a Youth Declaration on the right to learn.

The Unlock the Future of Learning event hosted in part by the UN Foundation that brought together some of the largest youth-led and youth-focused organizations and reached 800 million people across 6 continents.

Alice Mukashyaka, the UN Foundation’s Next Generation Fellow for Education, summed it up: “No action without us, the young people.”

The underrepresentation of women at the highest levels of government was on full display at UNGA again this year. Only 11% of speakers at this year’s General Debate were women. And of 193 UN Member states, just 28 are led by women.

At “Fair Play: Alleviating the Unpaid Care Burden to Advance Gender Equality,” the audience got a preview of a documentary highlighting the invisible, and unpaid, care work shouldered by billions of girls and women worldwide.

While the General Assembly didn’t take up any reform measures this year, Russia’s invasion of Ukraine has made reform more likely. That could open the door for an African, Caribbean, or Latin American country to have a permanent seat at the council and greater representation on security, economics, and international cooperation issues.

While it remains indecisive on the exact reform measures to be taken, the assembly ended with a clear call for structural change in the U.N. Security Council – a critical organ of the entity charged with maintaining international peace and security.

PrevPreviousClimate Change in Africa
NextClean Start Kenya: A Journey of 7 – A journey from pain to powerNext